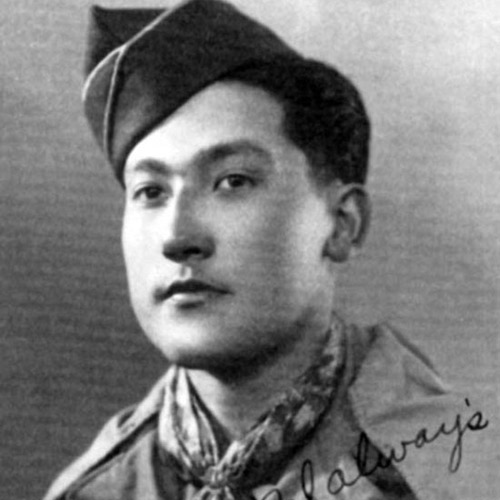 Citation: Private First Class Frank H. Ono distinguished himself by extraordinary heroism in action on 4 July 1944, near Castellina, Italy. In attacking a heavily defended hill, Private First Class Ono’s squad was caught in a hail of formidable fire from the well-entrenched enemy. Private First Class Ono opened fire with his automatic rifle and silenced one machine gun 300 hundred yards to the right front. Advancing through incessant fire, he killed a sniper with another burst of fire, and while his squad leader reorganized the rest of the platoon in the rear, he alone defended the critical position. His weapon was then wrenched from his grasp by a burst of enemy machine pistol fire as enemy troops attempted to close in on him. Hurling hand grenades, Private First Class Ono forced the enemy to abandon the attempt, resolutely defending the newly won ground until the rest of the platoon moved forward. Taking a wounded comrade’s rifle, Private First Class Ono again joined in the assault. After killing two more enemy soldiers, he boldly ran through withering automatic, small arms, and mortar fire to render first aid to his platoon leader and a seriously wounded rifleman. In danger of being encircled, the platoon was ordered to withdraw. Volunteering to cover the platoon, Private First Class Ono occupied virtually unprotected positions near the crest of the hill, engaging an enemy machine gun emplaced on an adjoining ridge and exchanging fire with snipers armed with machine pistols. Completely disregarding his own safety, he made himself the constant target of concentrated enemy fire until the platoon reached the comparative safety of a draw. He then descended the hill in stages, firing his rifle, until he rejoined the platoon. Private First Class Ono’s extraordinary heroism and devotion to duty are in keeping with the highest traditions of military service and reflect great credit on him, his unit, and the United States Army.