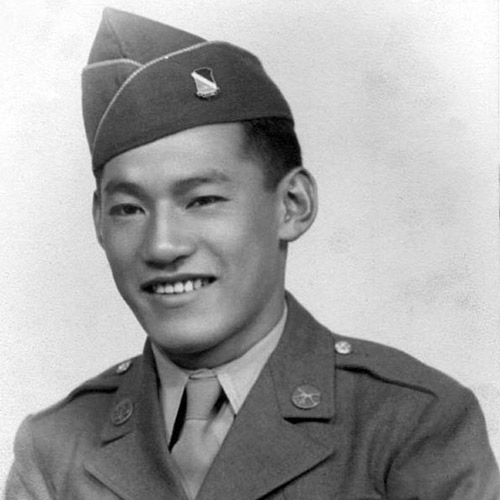 Citation: Private Joe Hayashi
Private Joe Hayashi distinguished himself by extraordinary heroism in action on 20 and 22 April 1945, near Tendola, Italy. On 20 April 1945, ordered to attack a strongly defended hill that commanded all approaches to the village of Tendola, Private Hayashi skillfully led his men to a point within 75 yards of enemy positions before they were detected and fired upon. After dragging his wounded comrades to safety, he returned alone and exposed himself to small arms fire in order to direct and adjust mortar fire against hostile emplacements. Boldly attacking the hill with the remaining men of his squad, he attained his objective and discovered that the mortars had neutralized three machine guns, killed 27 men, and wounded many others. On 22 April 1945, attacking the village of Tendola, Private Hayashi maneuvered his squad up a steep, terraced hill to within 100 yards of the enemy. Crawling under intense fire to a hostile machine gun position, he threw a grenade, killing one enemy soldier and forcing the other members of the gun crew to surrender. Seeing four enemy machine guns delivering deadly fire upon other elements of his platoon, he threw another grenade, destroying a machine gun nest. He then crawled to the right flank of another machine gun position where he killed four enemy soldiers and forced the others to flee. Attempting to pursue the enemy, he was mortally wounded by a burst of machine pistol fire. The dauntless courage and exemplary leadership of Private Hayashi enabled his company to attain its objective. Private Hayashi’s extraordinary heroism and devotion to duty are in keeping with the highest traditions of military service and reflect great credit on him, his unit, and the United States Army.

Joe Hayashi
Back
Scroll to top