Guadalcanal was one of the first campaigns in which the newly formed Military Intelligence Service (MIS) participated. The campaign also involved one of the most significant battles in US military history, representing a new kind of war that involved the complex coordination of land, sea, and air forces.

Following the attack on Pearl Harbor, Japanese forces established a major base at Rabaul on New Britain Island in the Southwest Pacific, which would become the headquarters of their Southeastern Fleet. In early May 1942, they landed in the British Solomon Islands. On Tulagi and the nearby islands of Tanambogo, Gavutu, and Florida, they set up seaplane and communications bases. 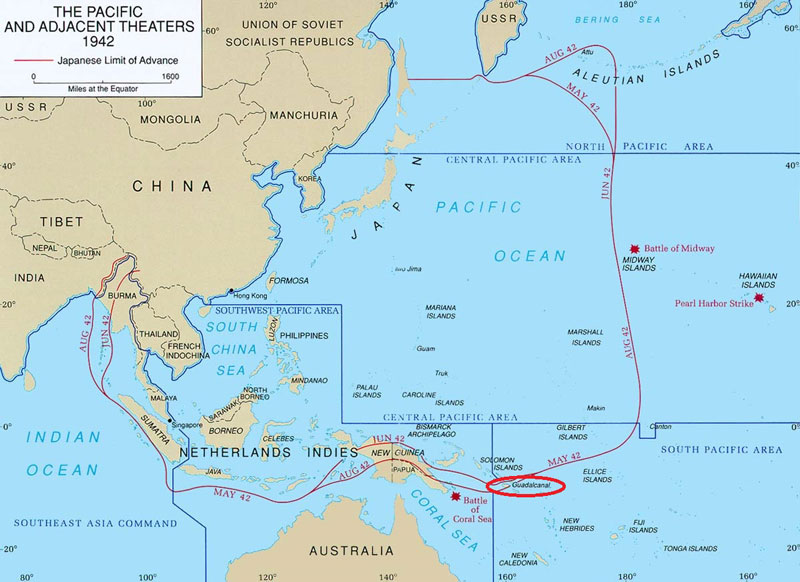 In July 1942, the Japanese took the northern part of Guadalcanal, a 2,500-square mile island of the Solomon Islands. Prior to their landing, the mountainous jungle island held little significance for the US military. However, this changed when the Japanese built an airstrip at Lunga Point to serve as the support for their Rabaul base.

On August 7, the 1st Marine Division landed at Tulagi, Gavutu, Tanambogo and Guadalcanal in the Solomon Islands. At Tulagi, Gavutu and Tanambogo, the Marines met intense resistance from the enemy, but would capture the islands within two days. The battle at Guadalcanal, by contrast, would rage on over a period of three months.

Although Guadalcanal was just about 90 miles long and 25 miles wide, its mountains reached as high as 8,000 feet, and its hot, humid climate made for harsh fighting conditions. Soldiers were prone to mosquito-borne diseases like malaria and dengue fever as well as other tropical illnesses. After numerous casualties, more from disease than from combat, the Americans were able to take the airfield and establish a beachhead on the northern part of the island. 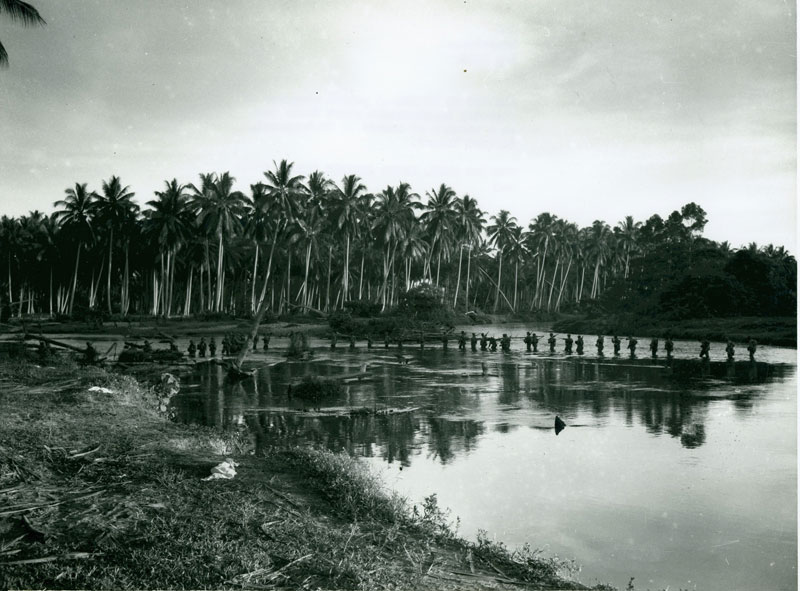 By the end of the campaign, both navies lost 24 ships, and Japan suffered the loss of more than 600 aircraft and pilots.1 The Japanese lost more than 14,800 soldiers killed in combat, 9,000 deaths from disease, and another 1,000 captured on Guadalcanal.2 The campaign cost the Americans more than 2,000 men killed in combat, more than 6,300 wounded and thousands more struck with disease.3 In fact, disease was the greatest detriment to the troops. For every combat casualty, there were five men who fell to disease.4

The insertion of MIS soldiers in the forward area and from remote locations therefore contributed to the campaign.

Before and during the campaign, intelligence about Guadalcanal Island itself and the Japanese forces there was inconsistent and often inadequate. The military relied on both sophisticated and rudimentary methods of gathering intelligence, including the use of “coastwatchers,” Pacific Islanders and Westerners stationed on the islands, whose communication with the military was unreliable.5

Six graduates from the first group of students at the Fourth Army Intelligence School in San Francisco were stationed at Nouméa, New Caledonia. From there, they were able to help the Marines by translating captured documents, letters, and diaries.

From September through November, the new Military Intelligence Service Language School (MISLS) in Savage, Minnesota, deployed six more graduates to the area, and the group worked together, sorting through whatever information they were given. Although most was of little use or out of date, a few pieces of information proved to be of valuable intelligence.

On Tulagi, for example, the Marines located a list of code names and call signs of all Imperial Japanese Navy ships and bases. They sent the list to Nouméa, and the MISLS group worked nonstop for several days to quickly translate the document. 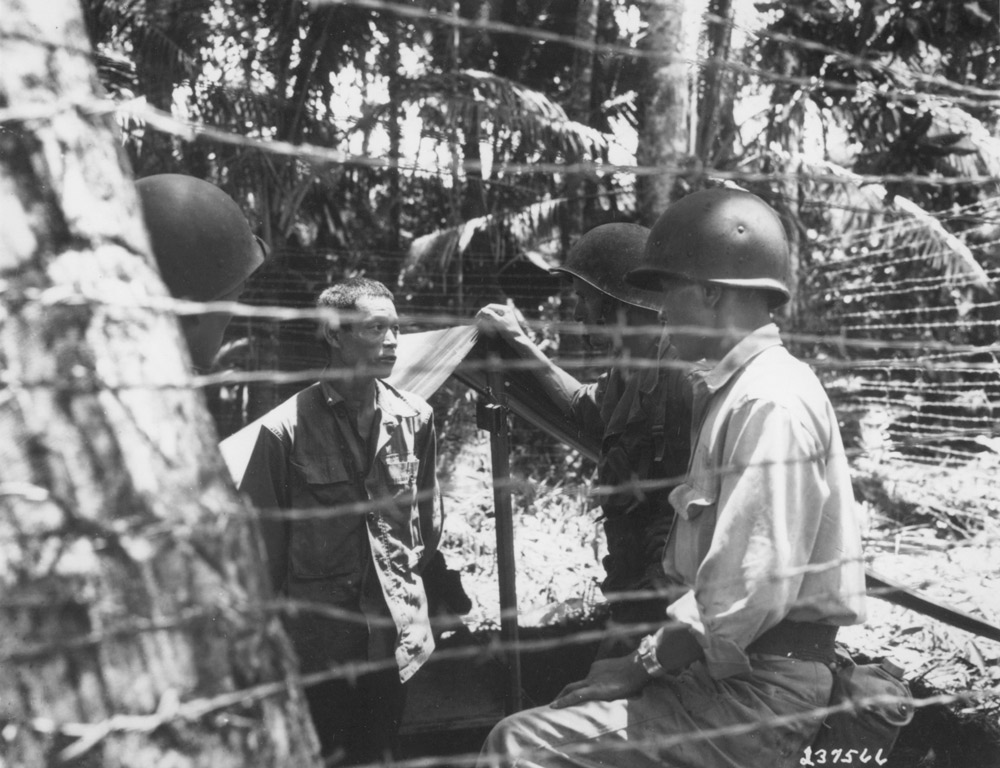 Captain John A. Burden, a Caucasian officer from the first graduating class of the Fourth Army Intelligence School, made his way to Guadalcanal in December 1942. He and his team of three MIS soldiers, Tateshi Miyasaki, and brothers Takashi and Takeo Kubo, had initially been sent to Fiji in May after their graduation.67

But it was not until Burden reached Guadalcanal that he was able to maximize his training, helping to translate documents and creating propaganda to encourage the Japanese to surrender. He pushed for the Marines to bring the Nisei linguists from Fiji to the forward area, and was finally able to transfer them to New Caledonia as well as to bring in Masanori Minamoto, a Nisei linguist who had been initially sent to Bora Bora. In January 1943, a team of ten graduates from the MISLS was also sent to New Caledonia.8

Burden led the Nisei participation in the battle for Guadalcanal. As the battle on the island continued, more prisoners and documents required processing. On January 15, two Nisei MIS linguists joined the 2nd Marine Division there and helped with the translation of Japanese documents, including a vital operational plan for the South Pacific area. A week later, Burden brought forward an additional four Nisei linguists. Three weeks later, another five Nisei arrived with a Caucasian language officer. It was in this manner that the MIS Nisei gradually became known for their skills and trusted to accomplish necessary work on the front.

As the battle came to a close, additional Nisei graduates were sent to the South Pacific. They were assigned to the US Army Headquarters, South Pacific Area, and to various units including the 25th, 37th and 43rd Infantry Divisions. By February 1943, when the fighting ended, there were some 300 POWs and thousands of captured documents for the Nisei to sift through. Recognizing their worth, more units began to request the help of the MIS.

The Guadalcanal Campaign resulted in significant changes in the ways that combat intelligence was retrieved and used. The Army learned that language specialists were needed on the front lines to translate documents and question prisoners quickly and efficiently. The soldiers themselves, often reluctant to take on prisoners, needed to be shown how POWs could be valuable sources of information. The Nisei, too, learned more effective strategies of gathering intelligence, from streamlining the process of interpreting documents to capitalizing on their understanding of Japanese culture for interrogations.9

Until the Guadalcanal Campaign, Japanese Imperial Forces had initiated and dominated every move in the Pacific. But the tide turned after six months of battle. The US gained victory and halted Japan’s advances in the Solomon Islands. Every Japanese offensive after that battle failed. With the entire campaign, Japan was dealt a severe blow to its navy, one it would not recover from during the war.